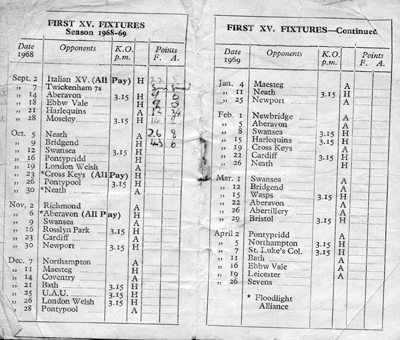 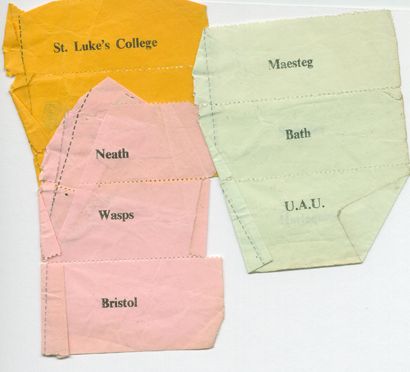 It’s a black wet night and all around are big dark wet men with glowing red fires in their mouths and blue smoke coming from their noses which rises up sparkling with rain in the blazing white glare of the floodlights. A massive green sea hangs underneath the  crowd and even bigger men in red are flying over it like huge birds diving for fish. I’m six years old and sitting on my father’s shoulders and going out of my mind with excitement at the colour and the sound and smell of the joy of thousands of men watching rugby at Stradey Park.

Any event packed with as much sheer stimulation as this will tend to have a lasting effect on a young mind. But not every child had the chance of hearing the sentence ‘He works with you, doesn’t he?’ addressed to his father about one of the players he worshipped. And this was a fairly common experience for boys in Stradey Park, and The Gnoll and all the other homes of industrial amateur rugby. So the gods of the pitch had something in common with our fathers. They were the same sort of human being. Which can only have been a good thing.
Sport for us meant rugby. The heroism of the muddy. As soon as I saw an image of a scrum half in a flying dive pass, I knew I wanted to play rugby, and as soon as I entered primary school at the age of 7 or 8 I wanted boots and a ball for Xmas and my birthday – which were’nt too far apart. And Boxing day saw me flailing to place kick in Felinfoel Park, as I knew the great Terry Davies did, who even used to date my big sister at one time. And as our next door neighbour was a Llanelli scrum half at one time, I felt if not obliged, then genuinely authorised to get very muddy indeed.
My first boots were leather-studded, and the Children’s Encyclopaedia of Knowledge (another Xmas present) advised the use of dubbin after every match, rubbed well into the ‘welts’. This was a whole new world.
When I was 8 or 9, a club rep appeared at our school plugging season tickets – as the man from the library had a few weeks earlier. Once I had mine, Wednesday nights offered a mid-week to look forward to, and no Saturday was complete without a match at Stradey against Neath or Richmond or Cross Keys, to watch the brilliant Phil Bennet do things with space and time and a rugby ball which have never been seen since, and which he seldom approached in his televised career, and the laws of which are only now being truly investigated by scientists in a massive hole in the ground in Switzerland.
We may have gone home from the match to eat our tea and watch Doctor Who, but Benny was definitely Doctor Where? We all attempted to imitate him through the exiting multitudes in the cinder-crunchy Stradey car-park, much to everyone’s annoyance. But it’s not impossible that a few tries were rehearsed then and there, or even a few careers forged on that surface in the rain. Stradey Park and the Tanner Bank were founded on the waste from the Matriarchal  steelworks which glowered in the distance, and grew out of the same shared experience of those who worked there, and in related industries.

Other boys of that time will also remember the half-time autograph-dash at the two teams eating oranges and talking tactics on the half way line. I wasn’t a great collector, but I’m sure I got some great players like Onllwyn Brace, Ray Williams, Ken Jones and Robert Morgan before losing or trading my book.
Some may even remember the rigorous international ticket allocation system, which involved the teenager, in my case, walking down the Mynydd Mawr railway from Felinfoel to club secretary Elvet Jones‘ front door in Pentrepoeth Road,  knocking on it, and asking. Then paying the face value.

Boxing Day
The traditional opponents for Llanelli on the sluggish day after Xmas were London Welsh. The glamorous exiles who’d left to become teachers and accountants and lawyers, living in the west London Taff-belt within easy reach of Paddington station and Brunel’s escape route, just in case. The local boys made good, who’d studied hard and ate all their vegetables.
At the time, they were the Kings across the bridge of Welsh rugby. Pretenders to the throne who also saw themselves as the brains of the Welsh team. whereas we knew that the heart of rugby was, and always would be, Stradey Park.
They saw us as hairy cave-dwellers who’d sacrificed the eldest virgin of the tribe at the winter solstice and were still recovering from the party. Invading our temple was an obligation. A White Man’s Burden, to them. A Christian gift to the pagans.
They were perfect for us. Those games were some of the most entertaining I’ve ever seen. Not for the technical connoisseur, perhaps, and definitely not for the fanatical victory hound, but great fun, and in the best sporting and seasonal spirit. An escape from the usual serious business of winning the Welsh club championship or Floodlight Alliance or Welsh Cup, which is what Xmas should be. Anything involving any significant prestige, such as a local derby, would have been a shame.

One thought on “Industrial Rugby 1958”