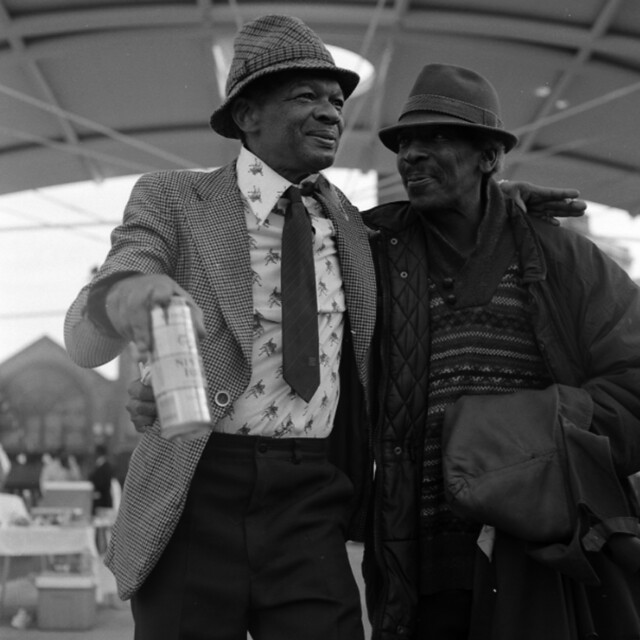 thanks to Jo Prosser & Pete Marchetti

According to the C15th Humanist ideal, a public square was a civilising influence. A space:
‘where young men may be diverted from the mischievousness and folly of their age, and, under handsome porticos, old men may spend the heat of the day, and be mutually serviceable to one another.’.
(Leon Battista Alberti 1452.)
Looking back, the Peckham Family Album tried to record some moments when, by encouraging contact between people, our Square did its bit for civilisation.
The regeneration of Peckham Canal Head in 1994/5, with its canopied all-weather outdoor studio, made this project irresistible. Meanwhile the post-industrial dereliction of the site was being replaced by new civic amenities, including a new pool, gym and a library which was to win the Sterling Prize. It therefore seemed important to chronicle this changing space, and the fact that Peckham was becoming one of the most multi-cultural places on Earth. After twenty five years of global wars and famine, it still is.
Passers-by were simply asked if they would like to be photographed for non-commercial documentary purposes. There was no obligation to provide names, but most did. There were very few negative responses. Most people understood the point, or saw it as a bit of fun on a Saturday afternoon. Undoubtedly, wielding a ‘wedding’ camera and being part of a team helped win confidence.
People were not directed or posed. There wasn’t time. And it became obvious fairly soon that the most interesting images were made when people were still uncertain about the whole deal – as well they might be. The indecisive moment between suspicion and trust often provided the most intriguing responses.
The generosity, tolerance and patience of the people seemed fathomless. Their willingness to cooperate radiated a kind of freedom which filled the space, and became worth recording for its own sake, as simply as possible.
Sharing this degree of trust became habit-forming, and kept us coming back for more. The project became less of a demographic survey and more like a warm bath of Humanity. It seemed, at the time, that the ideal of the public square was being met.
However, the local council now has other ideas, and is about to demolish the arch in favour of retail outlets and expensive housing units which many local people will not be able to afford.
During the production of this edition a global Pandemic has separated and killed millions, but has also revealed Human Nature at its best. But now, a megalomaniac has launched a brutal, unprovoked war against an innocent people. Thousands of civilians have been slaughtered, and millions of Ukrainian refugees so far have fled their homes– as many in the first week as fled to Europe in a year of the record-breaking refugee crisis of 2015. The resulting spontaneous display of cooperation and resistance by Ukraine and neighbouring front-line states is one which the civilised world should celebrate and emulate.
War is the opposite of civilisation. Putin’s power rests on sales of Russian oil and gas. He is in the process of shifting this trade to China and to the rest of the Kleptosphere he leads. If he is successful, he will end hopes of meeting IPCC CO2 targets, and guarantee a bleak future for Humanity.
It follows that to preserve the future we must be prepared to make the sacrifices needed to shame Putin and his cronies everywhere into oblivion.

If anyone sees themselves in this book, please make contact.

Guardian Camera Club 6:
Charlie.
‘The directness, clarity and honesty makes for an unaffected portrait. There’s lots of context and the square format (6 x 6 medium format film) is just right for this series.’
Sam and Tok.
‘A bit less depth of field than the photo above gives a better balance between subject and background here. The contrasting but direct expressions are compelling.’
Brothers.
‘This stunning double portrait is the best of a good set.’
Lord Gibbons, ‘Mayor of Peckham’.
‘This is quite different to the rest of the set; that delicate formality has gone and it seems genuinely warm.’
Caroline.
A quizzical expression gives this some humour, ‘Everyone is Famous In Peckham’ indeed!
Big Steve.
‘Does the choice of camera affect the way the subject relates to the photographer? Whatever, this is an excellent street portrait.’