This shot was taken at Eddystone House on the Pepys Estate in Deptford, south-east London. I was the photographer for the Albany Summer Playscheme just after the 1981 Brixton riots. We had just finished our two days on site, helping the local kids in their production: ‘The Funky Riot’, a musical on roller skates.
Of all the skaters, the girl in the dress was the most agile and twirliest, and knew it.
We had finished the project (after a swift re-write when the council heard about the word ‘riot’ in title) and were packing the van  when I noticed our prima-ballerina trying to go downstairs on her skates like Bambi on ice, and obviously feeling taken down a peg.
Even the raw beginner I was then saw the potential in the scene, and luckily, I still had my new Zuiko 28mm lens fitted to the Olympus OM1 I was still getting to know. I managed to expose two frames before she clicker-clacked to the bottom of the stairs, and was off in an embarrassed flurry of mauve and white petticoats.
I never got to find out who she was, or get her a print. I wish I could. Without the Albany, and the efforts of people like co-ordinator Jenny Harris, this image would not exist.

This week, I heard the sad news that Jenny Harris had died.  Jenny was a dynamic figure at the heart of Deptford’s cultural self-defence scene in the 1970’s and 80’s.  With her life-partner John Turner, she was largely responsible for the original Albany on Creek Road, and for establishing the New Albany out of the ashes of the old.

The Albany embodied life and fun in the middle of what was a bit of a concrete wasteland.  I’ve always fancied this shot managed to grab one moment which laid out the precarious relationship between the Deptford environment, and those born into it. The flower in the desert. Defying architecture and town planning by going downstairs in skates summed up the attitude of Jenny Turner’s Albany, and the improvisational spirit of the adventure playground movement it supported. I see this photograph as a small part of Jenny’s enduring legacy.
If you are the woman who was this Girl Descending a Staircase, or anyone who remembers this project, or any of the adventure playgrounds in Deptford at the time, please make contact.
I recently discovered that Tony Ray-Jones, one of my early heroes, had photographed this very estate some ten years earlier. Any memories of that time on Pepys Estate, when it was relatively new, would be extremely valuable

And an image finds a home. Jenny would be pleased I hope.

‘Set in a war torn community known as Scotland at a time when the gears of power are beginning to shift. Families struggle for survival, lords dominate the high-rises, and children possess insight and wisdom way beyond their years.
In this gruesome tragedy Macbeth and his wife, driven by fatalistic visions, are plunged deep into a future fed by bloody ambition.’ 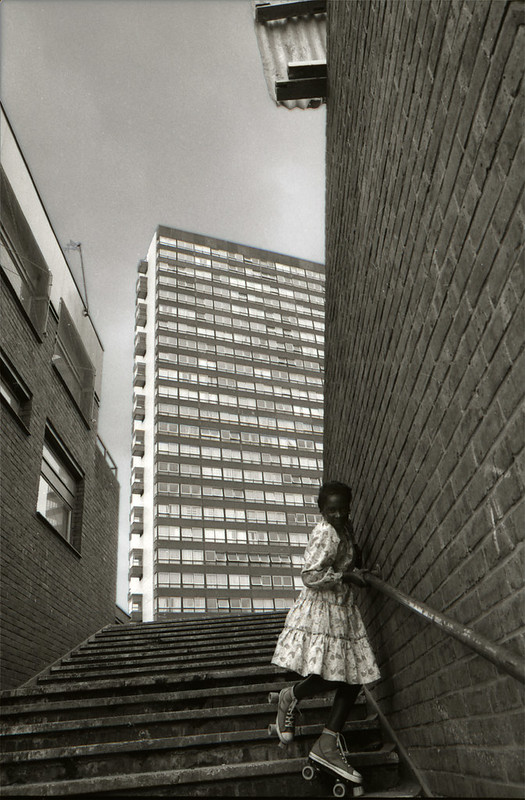